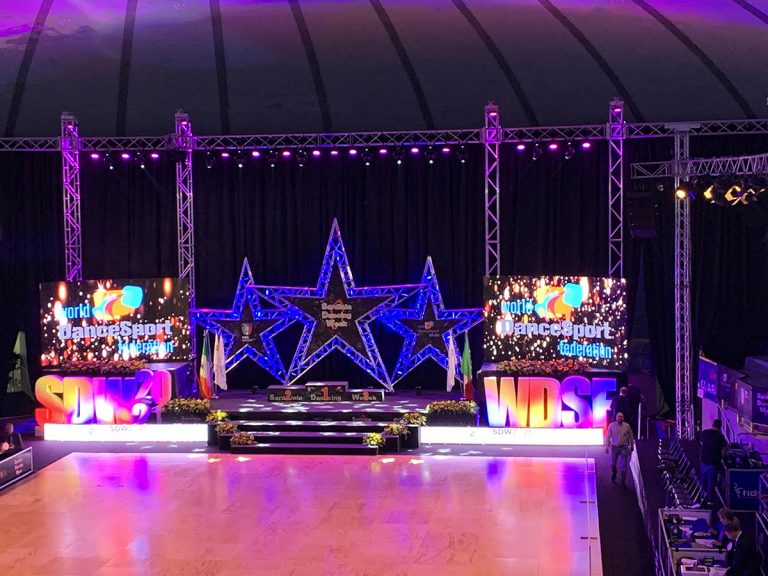 The stage at the PalaPirastu in Cagliari, Italy

What were your thoughts going into the World Championship? Did you have any expectations or goals?
DAVID: Making the final was our goal.  We were thrilled to make 6th out of a 7-couple final in 2019, but we knew that there were some excellent new couples that had come up from Senior III during the pandemic.  So even though we knew we had improved, we assumed it would be a real battle.
ALLISON: It feels so satisfying to continue through many rounds. Even though you may start to get tired, the adrenaline keeps you going!

How did this World Championship compare to other international competitions you have attended?
DAVID: It was rather odd in that, due to COVID concerns, there was a clear separation between spectator space and competitor space, and it took awhile to figure out how to get from one to the other. There were very few spectators (except for the European Latin Championship which drew a good-sized crowd) so limiting the competitors to their outside “village” meant dancing to a mostly empty house. 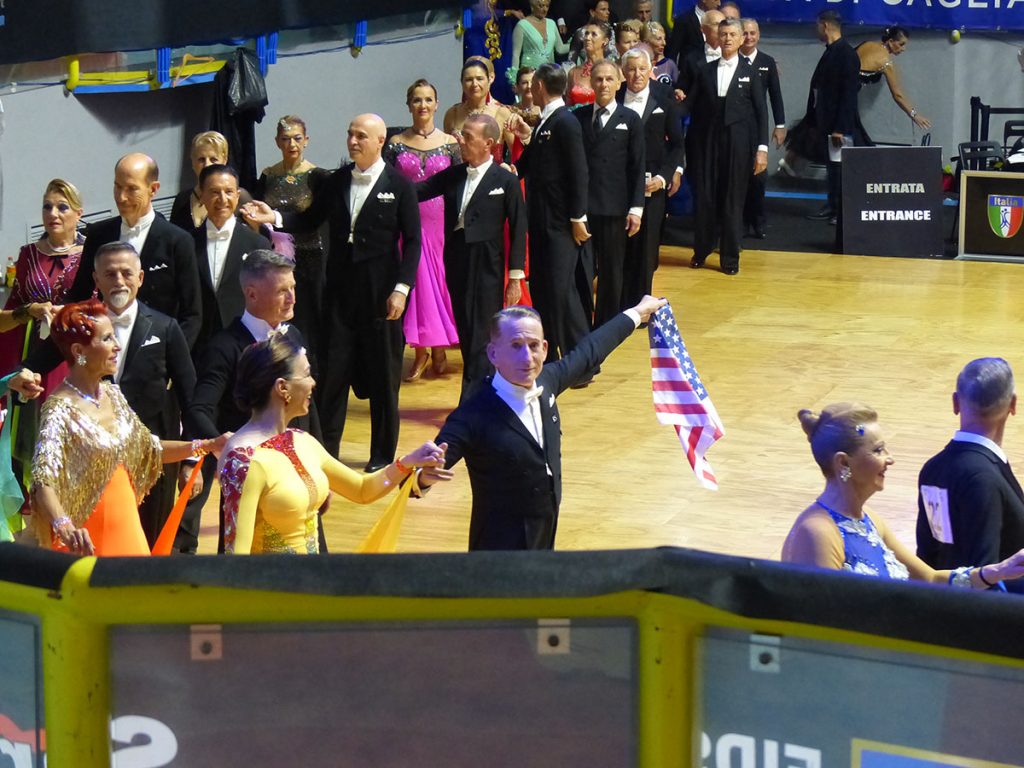 Allison Gonzalez and David Getchell in the Parade of Athletes

Were there any particular challenges getting to or from this WC?
DAVID: The host city is on the island of Sardinia and as the tourist season was over, there were very few flights to and from the city of Cagliari. We flew to Zurich where we had an eight-hour layover before we connected to a flight to Cagliari. Likewise, coming back we flew to Amsterdam, spent the night in a hotel, and then flew home. We also found that many of the staff at the host hotel, and many of the local shopkeepers spoke little English. Happily Allison is fluent in Italian so that did not pose a problem for us

Anything unexpected or unusual either on or off the floor you would like to tell us about?
ALLISON: We were having dinner after the competition and Paolo Bosco walked up to our table and told us that we danced well and that he felt we should have made the final. Of course, that made us feel honored that he took the time to talk to us and gave us such good feedback!

Were there any particular challenges faced at this WC that affected your performance?
DAVID: I had suffered a groin pull while competing in Vienna about eight weeks ago, so we were not able to train at our usual intensity. We kept up our mental training by continuing to practice carefully, attending classes, etc. but we did not feel we would be able to dance the required six rounds (if making the final) at full intensity. We decided to dance the early rounds with reduced energy and then increase as we went along.  Looking back, I think we did not “leave it all on the floor” during our semi-final. We don’t have a video of that night so we will never know if that was really an issue. 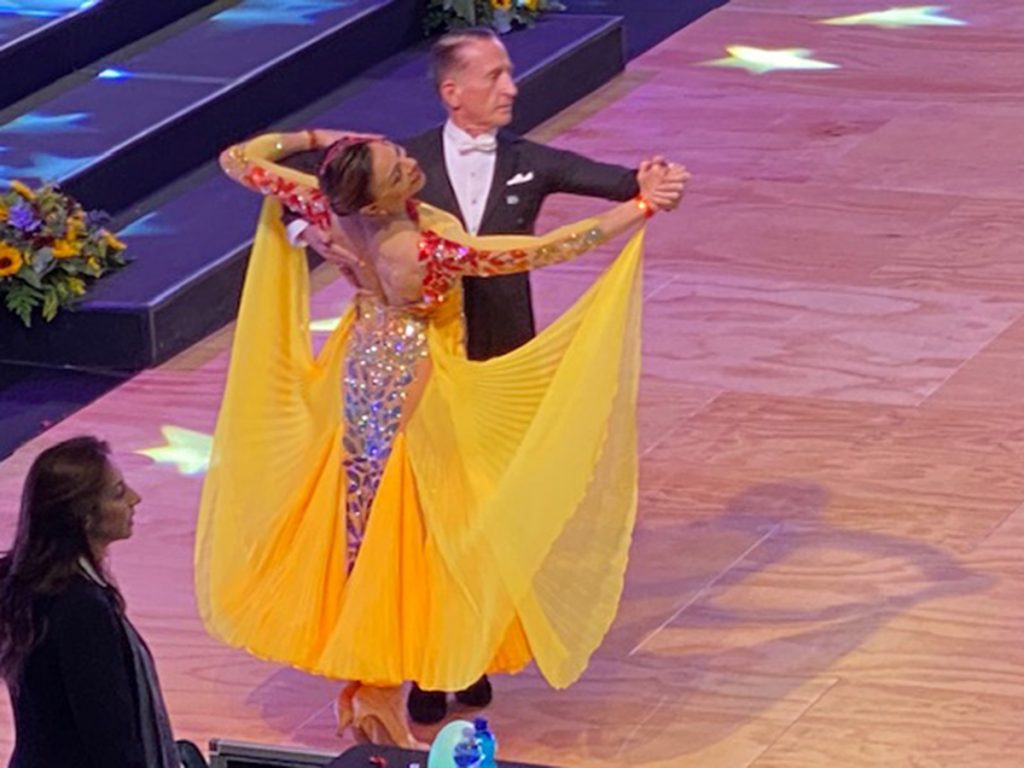 How did you come together as a partnership? How long have you been dancing together?
DAVID: I had been dancing for 15 years or so as a pro/am, an Amateur Smooth dancer and then Amateur Standard dancer.
ALLISON: I started to dance ballroom after I met David and we started to compete, coming up through the ranks about 11 years ago.

What distinguishes you together on the floor? What drives or influences you as a couple?
ALLISON: We have a similar esthetic about what we like and don’t like and we are both very driven by the music.

What needs to happen for USA World Teams to be more competitive at the WCs?
DAVID: The Europeans have advantages over us:
It is much easier, less costly, for them to attend competitions with a large number of entries. We had nearly 100 couples in this competition! They are very experienced and comfortable in these settings. They are used to the big changing rooms, bringing food and drink for the entire day and even bringing dress racks for their costumes.
Many of the top competitors travel with their coaches – we see them getting corrections in between dances, not just rounds. The best we could do was to ask a team member to video us and then view it ourselves. We either must get better at coaching ourselves or figure out how we as team members can coach each other.
ALLISON: They come from a culture where ballroom dancing is done at a young age, they quit to have a family, and then return to the floor in their senior years, so in general they have more experience than those of us who started later in life. Maybe this will change in time if ballroom dancing remains popular here in the United States.

Is there any advice you would give to future World Championship competitors? Is there anything in particular you learned? Is there anything you would do differently if going to another World Championship?
ALLISON: I would say to try to go to other European competitions before a world competition to get used to the atmosphere! Bring lots of shoes, since some floors are sticky and some very slippery.
DAVID: We like arriving a few days early so that we can adjust to the timezone change. Allison hates it when I zone out and keep repeating the same wall 😉 If possible, I would advise not holding anything back for the next round – treat every round as if it is your last! Also, see if you can get a teammate to video you – work together!

Was this your first World Championship? If so, please tell us about your experience.  What were your thoughts going into the event?  Did you have any expectations or goals?
TOM & EV: We have represented the USA at about 15 World Championships over the years, from Open Amateur through Senior IV.  Representing the USA at World Championships is always an honor.  Life is a bit more hectic leading up to an international competition as we try and spend more time practicing.  We really start to feel the anticipation of dancing in a foreign country, especially one with a different language. Our goal at this competition was to just dance well, and apply the training received from our coaches over the past year.

Were there any particular challenges getting to or from this WC?
TOM & EV: Getting to and from California and the Italian island of Sardinia was a bit unusual given short notice, all of the new COVID-19 travel requirements, and the many airline transfers. It took a lot of pre-planning to make sure all of the paperwork was in order. Fortunately we got through all of the airport checkpoints without a problem, unlike some angry passengers that were turned away at the ticket counter for not having the proper COVID paperwork. 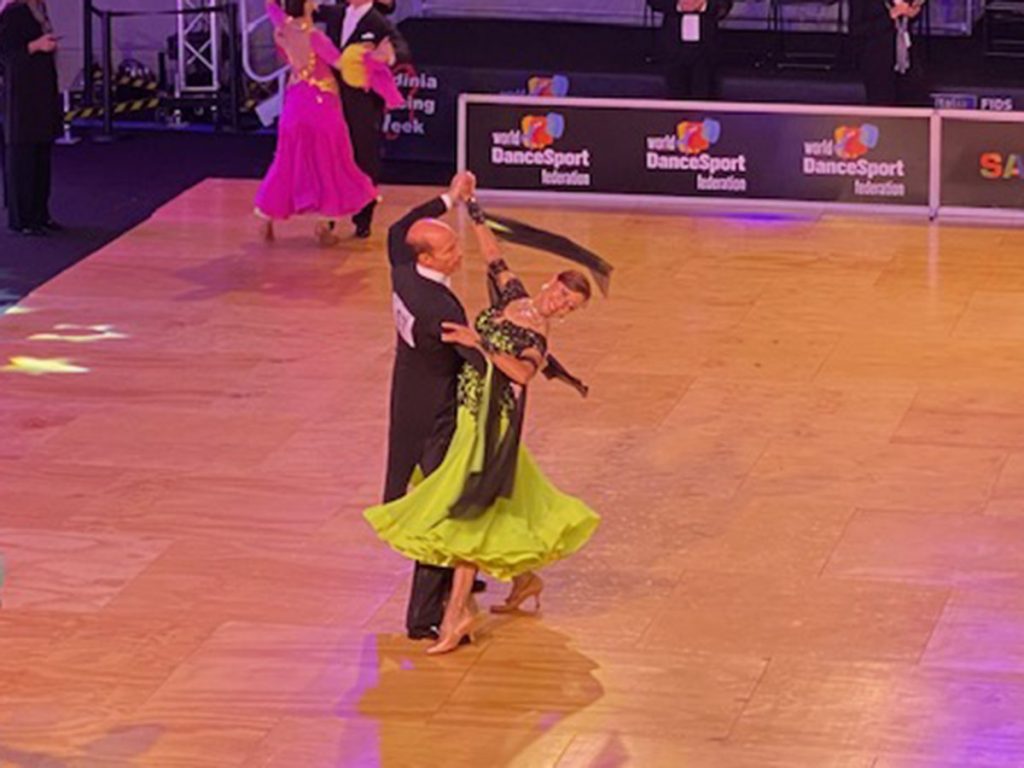 Anything unique or special happen to you on this trip?
TOM & EV: Not really, which is probably a good thing.  All of our luggage came through OK, unlike one of our trips to Blackpool where our luggage was lost for three weeks, and we had to dance with what we carried on the plane.  Due to the limited space in the Cagliari venue, it was a bit unusual that the couples for each heat in the early rounds needed to line up outdoors.  Fortunately, the weather was good!

How were you and or the United States Team received?
TOM & EV: The competition organizers and staff were very friendly and helpful. 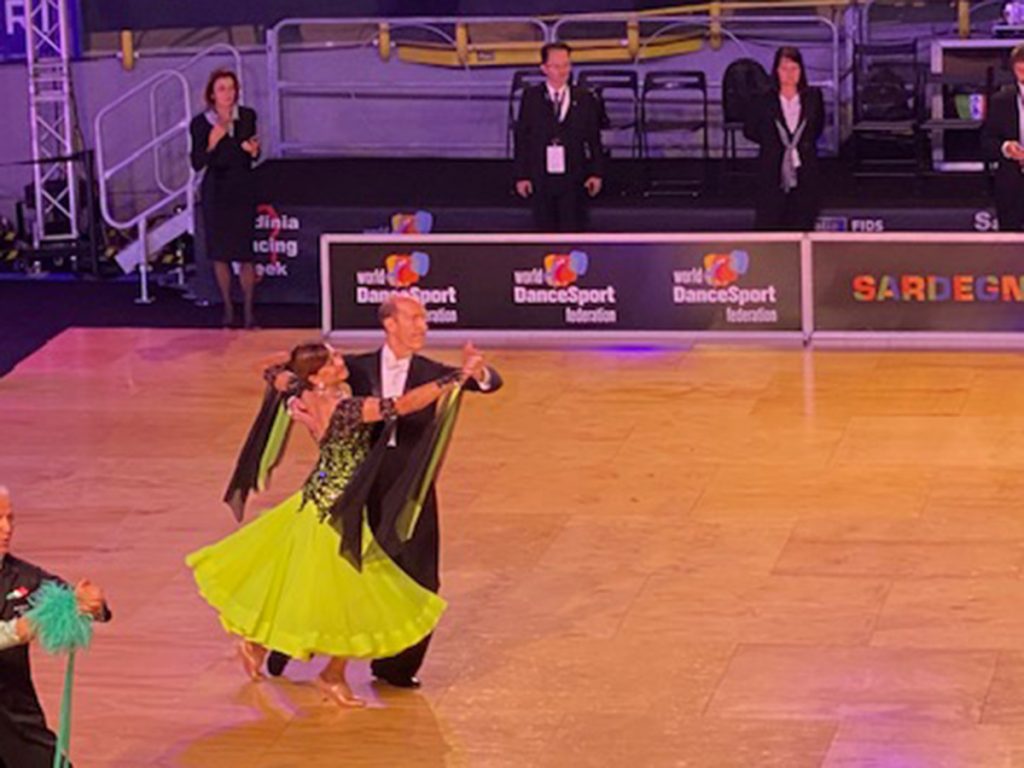 How did you come together as a partnership? How long have you been dancing together?
TOM: I was dancing with Wendi Davies in the late 1980s and she decided to become a ten dancer with the aim to turn pro. At the same time. I met Ev at a Cherry Hill, New Jersey dance competition and asked her if she wanted to dance together.  She said yes and we started travelling back and forth between Boston and Philadelphia on weekends to practice.  We’ve been together ever since.

How did it feel being a part of the official USA World Team?
THOMAS & EV: Representing the United States at the World Championships is always an honor.

Was this your first World Championship? If so, please tell us about your experience.  What was that like?
RENEE: Tom and I are so fortunate to have competed in seven WDSF World Championships.  This was the second time we were asked to represent USA Dance at the event, which magnifies the importance of the honor for us. This year, more than others, we experienced a stark awareness of those who were not there and of those who could not be there. As the 3rd place couple at the last Nationals in our event, we replaced Terry & Glendy Yeh and Winston & Lilly Chow, the 1st and 2nd place winners, respectively, from California.  They were the rightful representatives and they were sorely missed. As we stood waiting for each of our heats, with couples from around the world, we could not help but wonder – who else was not there? 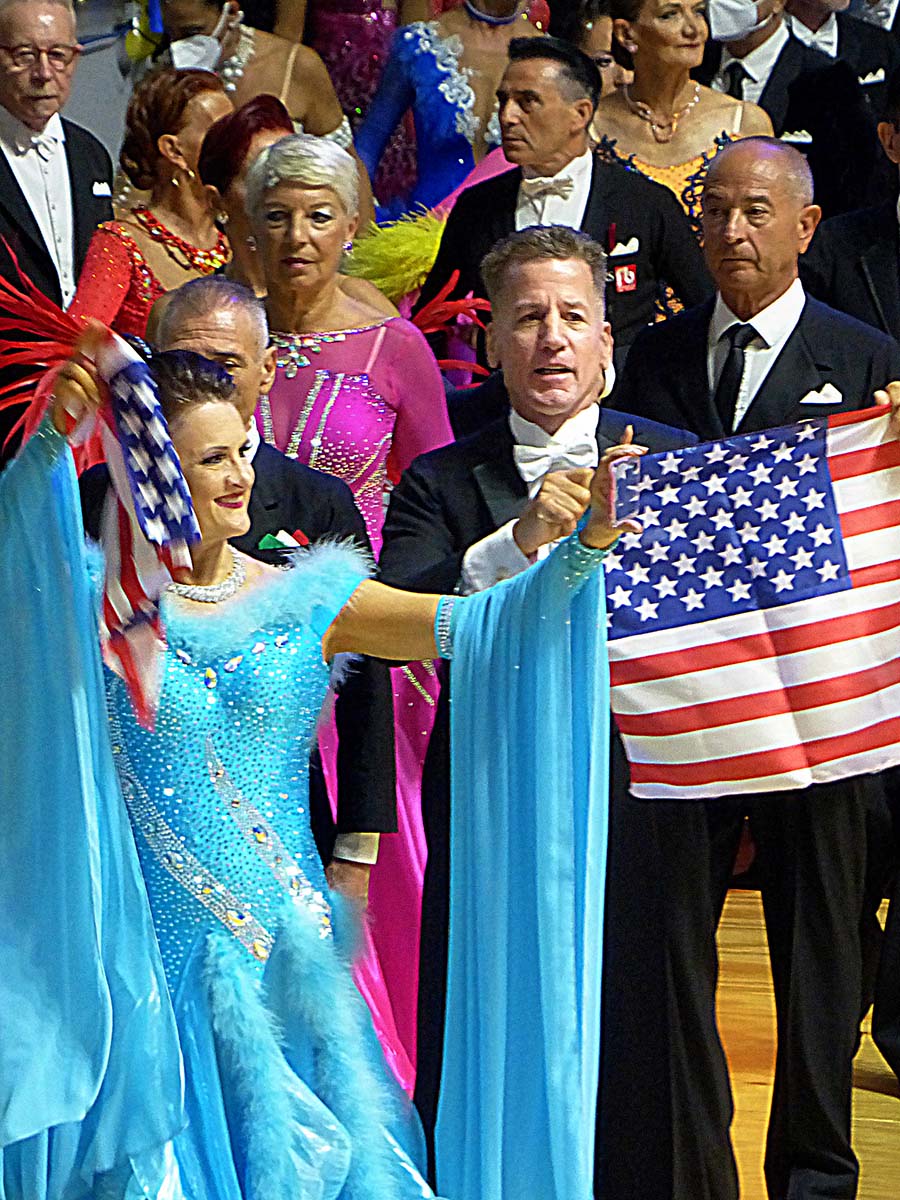 Tom and Renee Malinowski at the Parade of Athletes

How did you prepare for this important event? Was it any different than how you normally prepare for a competition? Did you feel prepared (both mentally and physically)?
RENEE: Tom and I were separated during most of the pandemic and unable to practice. We began in earnest four weeks before the tournament, working out every day, and found the endeavor to be extremely, physically challenging, after so much time off. Developing our stamina was the most difficult aspect of our preparations in such a short time. Once in Cagliari, our focus was on competing to the best of our ability, however, we also wanted to remember the greater significance of this particular world competition. To us, it was about connecting with the other competitors, fellow world inhabitants, all of whom were out-and-about, doing what they love and simply happy just to be there. Every one of us in attendance at the PalaPirastu — the competition site — could feel that joy! 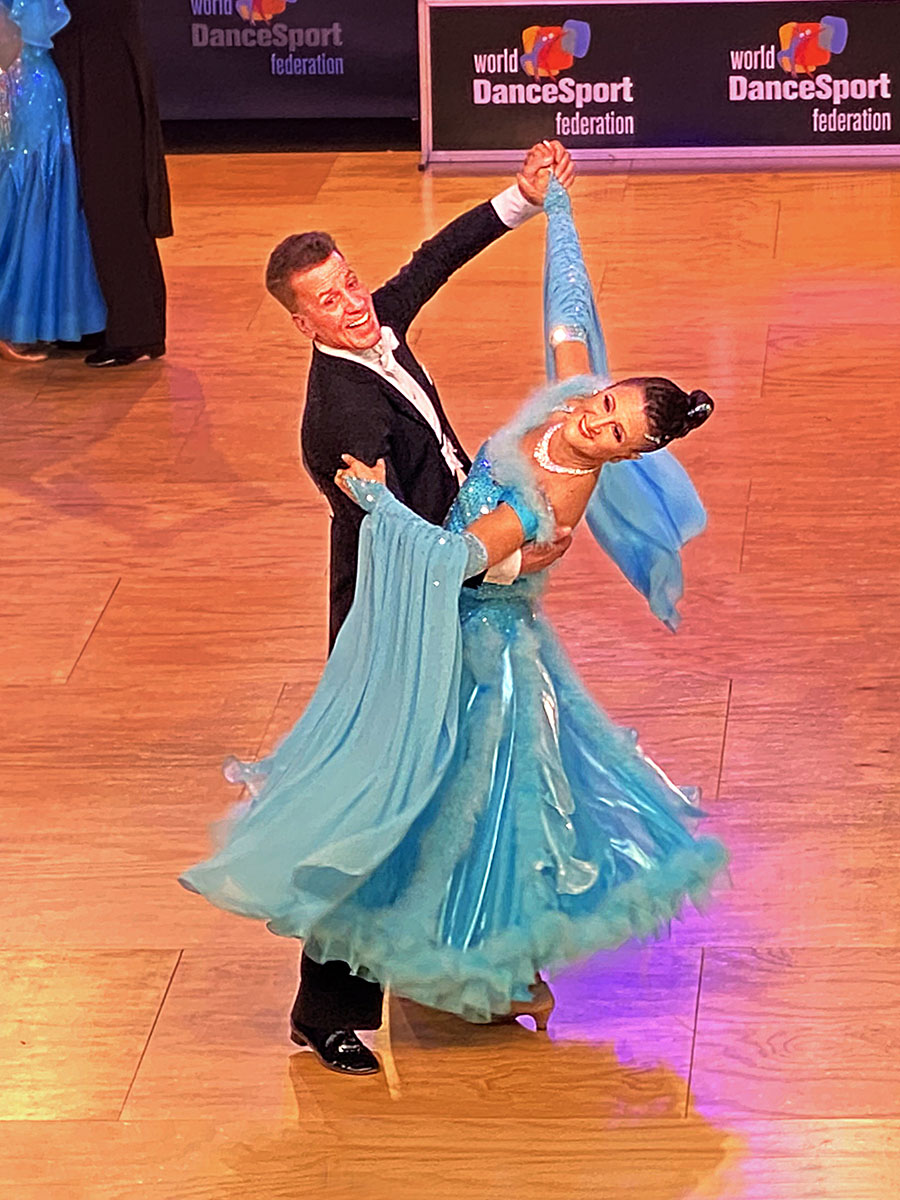 How did it feel being a part of the official USA World Team?
RENEE: Because of the pandemic, we felt a strong kinship with the other competitors, many of whom wore their masks right up to the moment they stepped onto the floor to compete. We have all shared the same challenges of the last two years. And some, more than others, have likely experienced hardships which will have changed their lives forever. This is why it was so important for Tom and me to remember that there was much more involved here than dancing in a competition, albeit, the world competition. This is why representing USA Dance and our beloved country, especially this year, was so awesome. It is also why Tom and I felt a responsibility to include our friends and family in our journey, especially our social dance friends, who are often in awe of the competitors they read about in American Dancer Magazine!